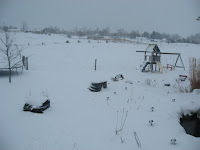 The snowstorm has hit. The kids were off school today (for the 7th day this year) and when I got home from picking them up at the babysitters, I could barely make it up the drive in 4 wheel drive. Every now and again, we think we could get by with a car that is good on gas mileage (let's face it, a durango 4x4 and a F250 4x4 with a V10 are extremely hard on gas), and then a day like today hits and blows that idea clear out into outer space. I think we have 6-8 inches now, and it is still snowing. I will admit, it is pretty when it's snowing and the trees (and animals) are covered in snow (I forgot to take the camera when I was doing chores, and just snapped these 2 pictures outside our back door): 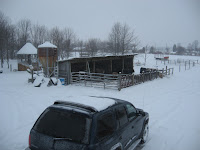 Todd had fire practice, and he called me shortly after I got home - due to the weather (and gas prices) if I didn't need him for anything (like to get in the drive) he was going to stay in town rather than make the 30 mile roundtrip to come home and go back to the firehouse.
So I did most of the chores (I didn't water the bull - he dumped his water trough and I'm brave, but not brave enough to go in his pen), brought the horses in, fed the cows, filled water troughs, fed the dogs, shoveled off the deck so all that snow didn't get dragged in the house and brought wood in for our woodburner.
After feeding the kids leftovers for dinner and putting them in bed by 8:00 (7:55 to be exact), I settled down for a quiet evening of sewing. I started to quilt this quilt: 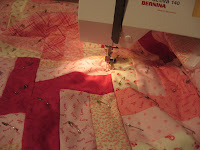 And then ran out of white thread for the bobbin when I was 1/2 way done. Bummer. This just means I have a valid excuse to go to JoAnn's tomorrow to buy more white thread so I can get it done. So far, I like the quilting I have done on this - and it's going quick, which is nice. I'm not sure what I will do with this baby sized quilt - I had thought baby shower gift, but all of our friends are done having kids (like us:)).
I also made another batch of yogurt that about 11:30 tonight I can put in the fridge. I've been using vanilla flavored yogurt, and tonight the kids (all on their own) got the bright idea to crumble up the homemade granola bars I made (again) over the weekend and mix that into their yogurt with frozen blueberries. 1 quart of homemade yogurt was gone in a day. This could be a daily occurrence. I did look on ebay at yogurt makers - and I will be buying one if they keep asking for yogurt. My kids are off, in that they will ask for fruits, veggies and especially salad before asking for most cookies and candies (with the exception of Oreos). I'm not complaining, because I'd rather try to feed them as healthfully as we can. It's just strange when out friends kids are clamoring for the cookies, and ours are begging for a salad.
So now I'm going to start pin basting another quilt so I can keep moving on quilting (once I get more thread). This quilt top has to be a little over 60 years old: 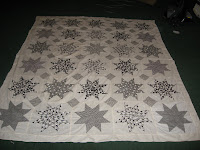 While I am not a even remote fan of black and white fabric (of any kind), I think this quilt top is striking in it's own right. It has some very worn spots in it, it has been in various attics over the last 60 years or so. I'm not sure if whoever made this intended for there to be another border around the outside edge, but I'm quilting it just as it is. 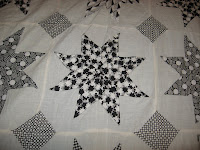 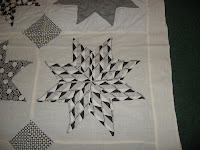 No more baby calves - I'm glad, although it was a little warmer here today (36 at one point). I just don't want to be the only one here when someone decides to calve.
Kris
Posted by QuiltedSimple at 8:32 PM

I like black and white. I will be glad to hang it on my wall when its done. Amazing what can be found in Grandma's attic when she lets us in. Mom

I absolutely LOVE the black & white quilt!!!! I can't say enough how much I love it, you are so lucky to have it...from Grandma's attic? WOW

I like the little red one, too, and I can't wait to see what kind of quilting you used, maybe you could teach me how?
thanks for sharing,
lyn

Your quilts continue to look beautiful!

Also, I've been debating making homemade yogurt. I would love to see a photo post on the process! (I hope I didn't miss one.) Or, do you have any websites you would recommend?

Hopefully everyone's snow will melt soon, but I bet it helps with getting those quilting projects done. ;)