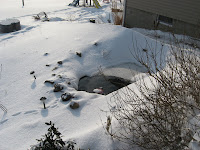 Well, we are slowly, very slowly digging out way out. The snow started Friday at 10:00 a.m. and quit sometime Saturday around midnight. 20+ inches with 3-5 foot drifts. Our little road was totally drifted shut. Roads were impassable and everything was shut down (stores, banks, churches and the like).

Saturday morning, Todd spent an hour trying to dig us out - the nice snowplow he rigged up - failed - but only because our driveway had drifts 4-5 foot deep in it. So it was back to the skidloader and bucket, scooping it up little by little. He got himself out and went out to help other farmin' friends undig and do chores (this time of year, our chores are a piece of cake). When he came home (at 4:30) he parked at the end of our drive (1/4 mile away) and hoofed it in so he could get out this morning to go get this: 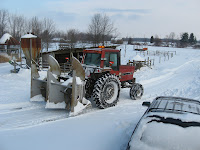 A farmer sized snowblower (if we are going to do this, we ain't doin' it halfway)
After all the snow, this is the only thing working to clear lanes, driveways and such. A friend of ours brought it in the blizzard of '78 - it only gets used once, maybe twice a year - this year it will be put to the test: 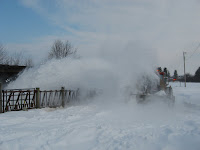 Yes, he is blowing the snow into the cow pen -
the only alternative would be to blow it into the barn
The cows were smart and are out playing in the sunshine. 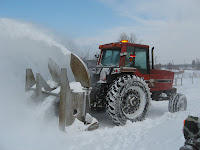 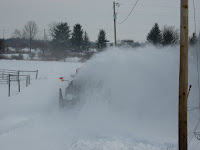 I, on the other hand, didn't go outside yesterday, had no desire to go outside yesterday, and spent the time sewing (yes, all day). Our satelite TV was out until about 2:00 Saturday, simply because the satelite part was buried under snow, and I wasn't going outside to uncover it (the kids went out about 2:00 and did it for me:)) I'll post more later on the projects I got done (and I'm hoping to finish up a few things this afternoon yet), but thought all the farmers out there would get a kick out of these pictures.

And, my kids figured out with drifts all around the trampoline, they could use the trampoline as a jumping board. Hopefully they will forget about this when the snow melts. What is kids' fascination with thinking they are superman and can jump off of anything?? 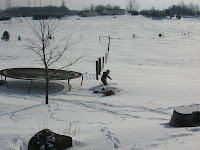 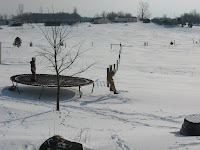 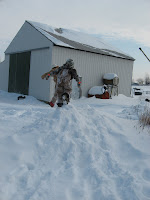 Amazingly enough, I am more than ready for spring, but after this weekend, I am perfectly happy to have a little more time to just relax, do what I want to do, and not be constantly on the go. But still - THE SNOW CAN QUIT ANY TIME NOW:)

Posted by QuiltedSimple at 10:17 AM