...would fly through a tonsilectomy/adnoid something or other like a champ.

Initially we were told we would be at the hospital until at least 4:00 tonight - so they could make sure he was taking fluids, going to the bathroom, and not going to throw up. Surgery was at 11:00 (I got to go back to the surgery room with him, and this reinforces my belief I could never be a nurse. Actually, I tried to get Todd to go back with him - sympathetic tear ducts here - but Todd couldn't fit into the jumpsuit and booties you have to put on), he was done with surgery at 11:30, by 12:15 he was moved to the ambulatory care unit (the pediatric recovery unit was full) and by 1:00 he had run the nurses ragged asking for popsicles, ice, jello and water.

His doctor came in at 1, totally shocked at how well he was doing, and sent him home at 2:00. I think he had something like 8 popsicles at the hospital and 2 or 3 things of jello. So for now, he is recovering very well. I'm expecting the worst at some point - but we were told to keep him on a strict Tylenol schedule. We've pretty much depleted a 3 lb. jar of applesauce, I've made 3 batches of jello (just since we've been home at 2:30, and this is him in a quiet moment: 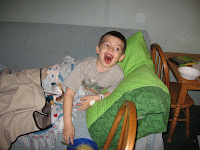 I did work on this quilt last night and for about an hour when we got home (and Tyler was supposed to be taking a nap - the nurse said the anesthesia would make him groggy - yeah right). It's a great project - it's quick, goes together easy and I am in love with it. Of course, it's not getting the other projects that I have started finished, but. . . you'll have that sometimes right? 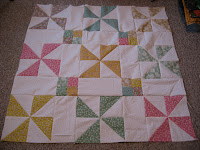 Posted by QuiltedSimple at 5:21 PM

Some good friends of ours recently took their daughter to get her tonsils out. It was a week before she even felt like smiling! Look at your son.......he is doing great!

Love the quilt! I went to the antique show and thought of you. There are tons of quilts everywhere and people from all over the country selling them. There is another one in October.....hint, hint!

Have a blessed day.
Lyns

So glad Tyler came through it like a champ! Your pinwheels look so great...wish I could say the same about mine. They're languishing in the closet.

Hi Kris, so good to know that Tyler was a champ through the whole thing...boy, he looks like he has energy to spare and then some...LOL
Hope YOU can get some rest as well. The quilt in progress is looking good, and will be a beauty.
Not to worry about the hand quilting on that slightly older project. I'm sure you would do just fine, worrying just makes it all harder.
Imagine quilting by the light of a fireplace or kerosene lamp...that will help your perspective. Big hugs, Finn

What a Trooper!!! Only a kid could bounce back so fast, :-)
he is so full of energy, he looks like he could fly, tee hee

and I love your pinwheels! so fresh and clean looking, what a perfect quilt for a farm. Reminds me of gardens and fresh milk poured over ice.