A Firefighter's Festival and Parade

Friday night we were off for the kids to ride in the Firefighter's Festival Parade. This was the first year we had even gone to this parade/festival (very sad since we've lived in this town for almost 10 years now) but it was such fun!! 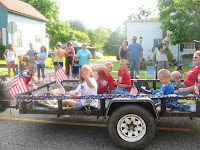 The kids decorated this trailer themselves, and our babysitter's cousin pulled them with his 4-wheeler. I almost ended up having to use our 4-wheeler and pull it myself, but fortunately, Charlie came through for us! 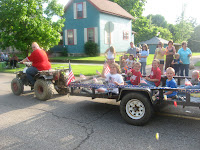 And the firetrucks. There were trucks from upwards of 30 miles away that came to be a part of our little parade. All together there were 7 different departments represented. And they brought the big guns, which meant LOTS of lights and sirens as they all tried to out-siren one another!! 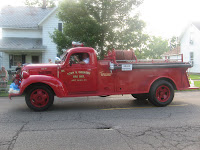 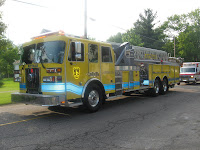 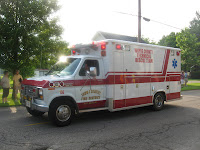 Then after the parade the firefighters and other businesses set up various activites for the kids:
A bouncy slide: 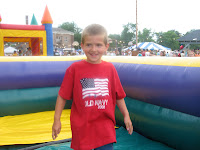 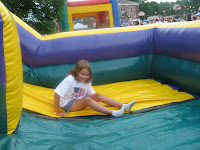 A dunk the firefighter game: 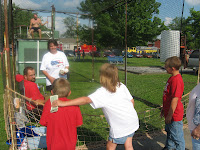 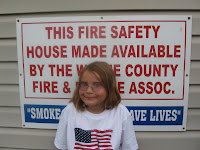 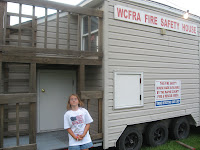 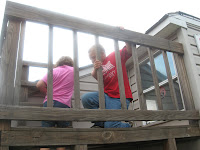 Which was a personal favorite of our 2 kids. I think they went through it 7 or 8 times. Very educational - there is a second floor inside, and they took the kids up there where they have benches, the kids lay or sit on these benches, the house fills with smoke, the smoke detector goes off, and it's all a drill on how to get out safely (checking the closed door with the back of your hand to see if it's hot, going backwards down stairs, looking out for younger ones going out windows). The kids loved it, and of course, we had to come home and spend Saturday morning talking about how they would get out of our house in an emergency, and where we would meet up with them and stuff like that. Which they are never too young to know.

Todd had to work until right before the parade started, but after the parade was over we ran home and got him and went back for the fireworks. Lllloooooonnnnnnnnnnggggggggg night as we didn't get home until midnight, but the kids are already talking about next year's parade and what they want to do!!
Kris
Posted by QuiltedSimple at 4:35 PM

There is nothing better than a parade and fireworks! Glad you had a great weekend!

What a great day. I live by a fire station a nd all they do is make alot of noise. There's nothing like that over here.

That is sooo much fun!! My kids were in the parades every year and now I miss it terribly!!