A need to vent (it could get dangerous here) 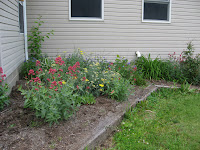 First, I love, love, love our school system. A great system, great teachers, awesome families (the ones we know anyways), great district (can you tell I like them). But. . . .some of the administrators I want to string up by their you-know-whats til the cows come home.

We have some very good friends of ours, who have a daughter in the middle school. A very wonderful, quiet, shy girl. She's been having some trouble with some other girls in the school. Her mom and sister we in D.C. the week before Memorial Day on our school trip, and when she ate lunch on Friday, these other girls put stuff in her lunch, and then at the end of the day told her it was rat poison. Can you all imagine getting that call as a parent, that your daughter believes she ate rat poison???? Dad took her to the ER where they spent a good many hours, to find out it wasn't rat poison, it was little acrylic or silicone beads. Mom is frantic in D.C. trying to get home, the administrators are called to let them know what is going on.....

.....and the administrators decide this was just a harmless prank - girls just having fun. HELLO HERE. I think he is on drugs. So this wonderful girl goes to school on Tuesday after her father has been calling the administrators, only to be cornerd by the girls who did this and told to "shut her mouth or they would make her pay for it." And the girl who put the beads in her food gets her choice - 3 days in school suspension or she can just end the school year early (and what do you think she choose?). Our handbooks say zero tolerance for abuse, bullying and pranks. The wonderful girl was afraid to go back to school for the rest of the year, and when her parents asked said Administrators how they should deal with next year, were told - why don't you just open enroll her in another district.

This is no different than a kid bringing an unloaded gun onto school property, or someone thinking they can bring a prescription narcotic in and do the same thing to someone else.

The family was on Channel 19 News out of Cleveland. They are livid, heart broken, disgusted, furious. Families in support of them have been calling the school for days on end to voice their outrage. I know there is going to be bullying and violence in the schools - but I am so digusted with administrators who push it off as harmless pranks.

I called 1 of the administrators last week - and specifically asked him about the schools zero tolerance policy - which he said is in effect and basically he thinks it doesn't apply here - that this was just harmless fun. Then I asked him - so when another kid brings an unloaded (or heaven help us, a loaded) gun to school - that will be just fun? What kind of message are we sending to kids - that there will be no consequences to their actions? That they can pretty much do whatever their little hearts desire and walk away free as can be? I sort of went off on a rant with him - that I want my kids to be safe at school, and not be subjected to this kind of treatment. Although I know in my heart - Jessie would have flattened the girl - no questions asked (which also would have been fine by me - there is a difference between standing up for yourself and being a bully). I have kids that don't have a shy bone in their bodies (Tyler used to but he is getting better).

And...where in the heck were the parents???? Oh wait .... I know, the one mother drives a bus for another district and pulled some strings so her kid got off scot free...... (as Jessie said to me upon hearing this - Mommy, I wouldn't want to have to face you afterwards if I did something like this - you would be so angry at me - guess she knows where I stand - haha).

And we wonder why there is violence in the schools......

(like I said, just a little need to vent here)
Posted by QuiltedSimple at 9:31 PM

Goodness- that is absolutely absurd. If a child is in the ER, it is not a harmless situation, even if found to be a prank. Situations like that can be life-altering for certain kids. Those administrators need to step up and set an example that behaviors like those will not be tolerated. You got me heated! I'm with ya...

Wow! That is insane! I can't believe this. If it would have in fact been rat poison, it could have been bad. Really bad. What is to stop these girls from actually giving someone rat poison now? Early dismissal. Sheash! This gets under my skin in all kinds of places.

I'm not normally one to encourage legal action, and I'm not sure it's warranted, but it's possible that this could be considered assault. At the very least it would get somebody's attention. And open another whole can of worms in the process, I'm sure. (I'm kind of surprised the ER staff didn't report it.)

Gemma was bullied throughout last year. at some times it got physical but the school refused to do anything. Their advice was to move her. It only ended when Gemma ( with my full backing) lost her rag and flattened the 2 girls, giving one a lovely black eye.

Get this though. the parents complained and the school threatened to suspend Gemma as 'they can't condone violence'. I lost the plot and threatened to get the police and media involved. It turned out that the parents didn't know the kids were bullies and this was the first time they had heared there was a problem. The school hadn't informed them as they didn't like to admit there was a bullying problem!

I wish I would have been the principal...a different scenario I assure you!

I would be livid too. That is considered "bulling" in my opinion. And to end up in the ER, they should make the parents of the the girl(s) who did it PAY the ER bill.

I would be absolutely livid! That's horrible.

It really emphasizes that bullying can take forms other than physical.

I wish I could say I've never heard about this kind of terrorism, but I have. As a parent of an anaphylactic child I hear stories often of a anaphylactic child being terrorized in the public school systems. Bullies do things like breathe on kids after eating a PBJ, threaten to throw one on a kid or even put contaminated food in their lunchbox. It's scary and very dangerous. I hope the little girl is doing well through all of this, poor thing!

That's totally irresponsible. I can't believe she gets an early vacation for that.

Wow....I"m nearly speechless. No action is just crazy! I hope they change their minds!

oh, this sounds like a nightmare! i am glad you took action and called the school, i would have done the same thing!

I can't believe the action that district took. It is why I homeschool now. We had so much crap going on with girls picking on my oldest daughter, then it started with my youngest daughter. They couldn't take it anymore. We pulled them out. Best decision we ever made.

Unfortunately, the only thing the "Other Girl's Parents" would understand is maybe monetary, and make them pay for the ER visit? Maybe a few thousand dollar fine (to cover any testing) would make them take notice...how deplorable that nothing was done to make the parents know how important this offense was!!

Now you got me riled up, too, I"m going to have to google the headlines!!!