Since I've been back to work, I re-started the laying out of the clothes routine at night with my kids. This helps them (?) be more independent in the morning, as they know what they are wearing and can get dressed. Plus, with leaving the house by 7:30 each morning, they can pretty much wait to get up until about 7:10, get dressed, brush their teeth and comb their hair and we are out the door. Well, tonight at 7:30, Jessie tells me "Mommy, I have no shorts to wear tomorrow."

"How about capri pants?" is my response.


Rather than do laundry, I decide to sew her a pair of shorts, which then led to a tank top style top. 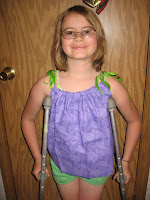 Which I then had to abandon as I couldn't find my elastic (and I know I have 3 yards of it laying around here) for the waist on the shorts. 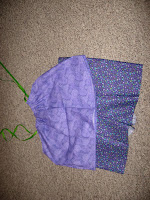 But she loves them (purple and pink are her colors) - so that is all that I care about. I myself don't particularly like the colors, but . . . .they aren't mine to wear, are they now.


So now I am off to do a load of laundry so she has something to wear to the babysitter's tomorrow. Which is entirely my fault, as I haven't brought her many pairs of shorts yet seeing as how we are just now getting warm enough for shorts weather in the last week or so.


P.S. In response to Gina's question if the bulls are friendly - they are...but on their terms. I don't go in the pens with them - and I try to make sure if I am in the pasture with them that I have a clear path to the fence. We don't allow the kids to wander the pastures when the bulls are out either (other times of the year the kids have free rein of the pastures with the cows and calves). Our bull (the Maine bull) Todd has been known to put a halter on him and lead him around, and the bull will scratch his head on Todd's leg and end up with Todd on his back he gets so enthusiastic. But he can also be an idiot if he is in the right mood.
Posted by QuiltedSimple at 6:27 AM

Love the way you think! I would rather sew that do laundry any day. Hope Jessie gets her cast off soon.

Love it, what a good mom! I can sew, but my answer would have been to pull the cleanest looking shorts out of the dirty clothes ;)

I just wanted to say hi! I just found your blog at the quilting gallery, I am just north of you in Medina county--and I am a mom, quilter and we are just starting a farm! I have to go make dinner, but later after the kids are in bed I'll be reading more of your blog---I can relate to a lot of it so far, LOL!

My elastic is in the tackle box with the velcro if you want to borrow mine...