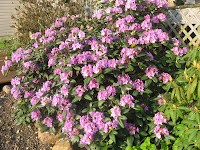 Yesterday I picked Jessie up from school to go get her full length leg cast off. We knew she was more than likely going to a cast that would go to just below her knee (she was hoping it was going to be totally healed and she would be done) that would be on for 2-3 weeks. I was so hoping for 2 weeks, but... 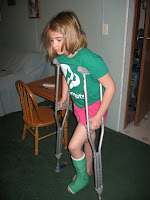 It will be 4 more weeks in a cast to just below her knee. The break in her bone just above her ankle is not healing as fast as they had hoped. The top half of the total break has healed wonderfully - the bottom half not so well. There is just starting to be some new bone growth - so her doctor wants to give her 4 more weeks in a cast. June 6th is D-day - for either the cast to come totally off, 4 more weeks of yet another cast, or surgery. 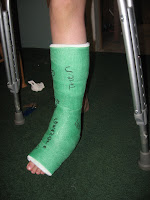 And she swears she is never ever, ever going ice skating again. (But then she watched the movie Ice Princess one night, and asked if we could get her ice skating lessons so she could skate like that - our response was absolutely, positively NOT).
The positive aspect is she can now ride her own bus, and be in school on crutches rather than the wheelchair. She so loves school, after getting her new cast on, she begged to go back to school - she was able to go for 1 hour.

On a funner note, I received my bloggy birthday gift from a drawing over at Mama Urchin's. I absolutely totally love it. I couldn't have picked better colors for our house myself. Thanks Jennifer!!! 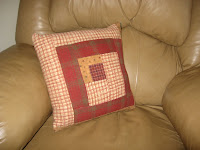 Last night Todd and I went wild mushroom hunting back in our woods. We love wild mushrooms sauted in butter. But, unfortunately, we must not be getting enough sunlight around here - not a single mushroom (last year we picked out of our woods about 3 lbs.). I never pick a single one - I just go along for the ride (I don't want to be the one that picks the 1 bad poisonous mushroom).

And. . . .I now have a little boy who wants his own chickens. The kids were up at my parents house for the evening last night (there was a mother-daughter dinner at my parents church, and Jessie went with Aunt Sara and Grandma) and Tyler stayed home with Grandpa. Well, they have 10 chickens right now (with more coming) so Tyler was playing with them (picking them up and carrying them around). He gets home and says all puppy-dog-eyed to Daddy - I want my own chickens to play with. I'll take care of them, feed them, gather eggs - you just need to build me a chicken coop. So it looks like chickens will be coming to our house sooner rather than later (although Todd wants nothing to do with raising them from chicks).
Here's a few pictures of my spring-blooming flowers: 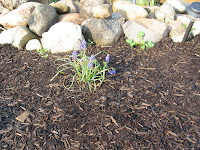 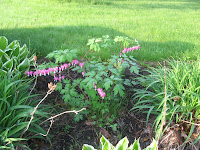 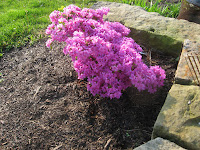 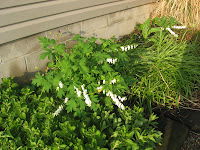 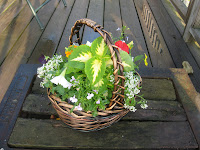 Thanks Mom for the basket of flowers!!!

Posted by QuiltedSimple at 7:32 AM

Well, with all these chickens and roosters in your sewing room... you have to get some real ones!! I would like to live vicariously through your chicken-having. I want chickens too but its not realistic in our small backyard. Glad to see your daughter is up and around now!

Hooray for Jessie's new cast! (new freedoms)but I sure hope she doesn't have to have surgery! the summer would be hard!

I lvoe the bleeding hearts, the purple one (maybe 3rd pic)is that an azalea?
And, now you're going to have to teach Tyler the Chicken Dance, because it will make them lay better!

I'm so glad you like the pillow. I hope Jessie is doing much better soon.

oh, your flowers are so pretty. i am jealous about the chickens1 I have always, always wanted some! I hope your sweet little girl gets that cast off in four weeks, and can be done with it all! it sounds like she is handling it all so great though.