I don't normally endorse name brand stuff for my kids - unless I get it on sale (I am a regular at the Children's Place twice yearly clearance sales at our local outlet mall when everything is 3.97 and under - you won't catch me in there any other time of year). But there is one exception: 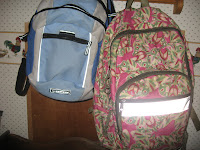 Back when Jessie was starting preschool, I brought her the cheap, plastic disney princess back pack. It didn't last the entire school year, and she was only going to school 3 mornings a week (with me driving her there and picking her up). So before she went to kindergarden, I searched for a backpack for her - and discovered LLBean and Lands End backpacks.

Her's is the pink LLBean one (obviously) and she has had it for 3 school years now - and she is bound and determined (without much success I might add) to destroy it, as I told her at the beginning of second grade the only way you are getting a new one is to put holes in this thing so it won't hold anymore.

She has dragged it across concrete and gravel by the straps. Tonight as I was getting her off the bus, she stood at the top step of the bus and tossed it over my head to land in the dirt (she says has a phobia about hopping down the steps of the bus with her backpack on and a cast on her leg - I think she is trying to annoy the living daylights out of me - which lately she is very, very good at).

And the sucker keeps on ticking. Not a hole in it. A few slightly worn spots on the bottom, but not a hole. I'm sure it would last another year easy. Todd used to say I was being mean not to buy her another one every year (but heck, the thing had barely started to fade after kindergarden). Now he is wondering if this one will last until she goes to 6th grade at our middle school (in fact, he said something to the effect of I could patch any holes that develop in it - I said get real.

Tyler's had to come from Lands End - by the time I got around to ordering his for last year, that was the one I found - but it has made it through 2 years of preschool (this year was 4 mornings a week) and still looks pretty dang good.

So for all you mothers of school kids either now or someday in the future, this is one product I will pay the $24 for it. And I just might be stubborn enough to have her use it another year....

oh - she will not like this if I do that. She has her eye on the blue floral one from LLBean as we speak.
Posted by QuiltedSimple at 6:14 PM

I agree that a GOOD backpack is totally necessary! I remember my brother and I breaking our way through several book bags until my mom bought us JanSports. I actually still have mine!

my son has a land's end back pack and it went through one and a half school years...the only reason he stopped using it is because he needed a bigger one that would fit his school folder. they do put out a quality product!