Friday night Todd decided he didn't like the chicken coop/buckeye barn where he put it originally, so we had to move it: 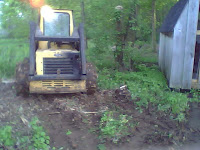 And if it's too muddy for the skidder to move the shed, 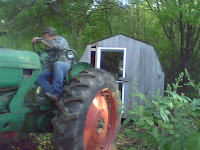 You get out the little tractor!!! 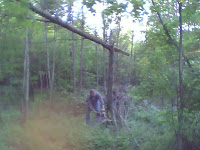 And then, while you are at it, you cut down some more trees (Yes, very blurry photos here, but I was using my cell phone - didn't want to run inside for the camera...)

Saturday morning found us at the hatchery at 9:00 in the morning - and we will at various points over the summer (June 16th, June 23rd and July 21st) be bringing home a total of 24 little chicks - 6 of which will be roosters which will eventually be cut down to 2). Tyler is excited though, so that is the important thing. Wonder what happened to our plans to get only 3 or 4 hens and 1 rooster?????


Then it was off to 4-H for the Cloverbud field trip - we went to the YMCA. Home by 12:30, switch children with friends of ours for the rest of the day and Sunday morning. The boys were good, but they didn't go to bed until almost midnight, and then were back up and at it at 6:30 a.m. on Sunday. I was soooo tired.


Yesterday morning, 3 of our cows were in heat - so we decided to go ahead and A.I. them. We'll be turning the bulls out this coming weekend, but might as well try and A.I. them - we've had the equipment for a number of years now - might as well get some use out of it.


I realized I never posted a picture of this quilt, which I finished a while ago: 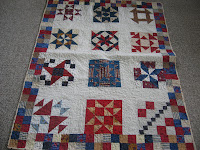 I just need to figure out where to put it. 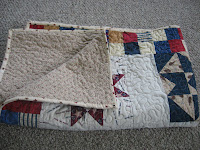 Today was my first day at the new job - as Administrative Assistant/Secretary in a District Church office. It'll be interesting, different (way different) from the law firm, but I think it'll be good. The hours are a good fit for us (8 a.m. to 2 p.m.) so I won't have to be leaving work early when the kids have stuff going on at school.


This week is Tyler's last day of preschool - so I'm taking off on Thursday (already:)) for his picnic. Next week is Jessie's last week as well.


Tonight it's do my block for the quilt along, and try and get preschool teacher gifts done for Tyler's teachers for the picnic on Thursday. Nothing like waiting til the last minute, right?


Have a good evening,
Kris
Posted by QuiltedSimple at 5:51 PM

oh, the quilt is beautiful! and holy cow! to move a barn looks like quite a chore!

the quilt is awesome! I have a place you could put it,,,tee hee

Good luck on the AI, I can remember when they did it by hand,,,,eek!

I don't think I ever said congrats on the new job! Hope it works out well for you. I like this quilt...especially the quilting. Oh how I wish I could quilt like that!

Congrats on the new job, but do you get time to work. I feel tired just reading your post never mind actually living it. LOL
The quilt is lovely.

Looks like hard work moving a barn. I hope the chicks do well.