Well, fall soccer ended for Tyler on Saturday - a little bit of a let down. His coach actually kept track - Tyler scored the most goals over the 6 games with 37. The team won 5 games, lost 1. So Tyler was extremely bummed that soccer is done until next Spring. 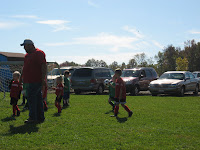 I could not get a good video of him scoring a goal, but here's some pictures of him: 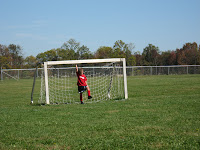 He hates playing goalie with a passion!

Saturday night we had a fire department hog roast. Of course, Todd tells me about this Friday, and there is costume judging for the kids. Tyler's costume is done. Jessie's I still need to do the dress and buy her a witch's hat. So we come home from soccer, I sew the dress, and on the way in we stop at the store and buy a witch's hat - and no other kids had costumes on, so they didn't do costume judging. At least I am ready for Halloween though.

It was a beautiful afternoon. We played cornhole: 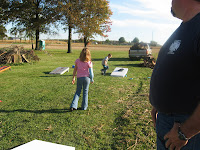 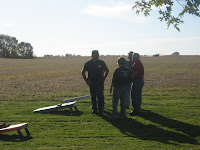 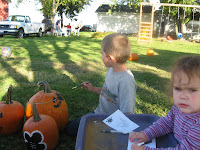 Some adults tried to hula hoop with the kids (around their necks, no less): 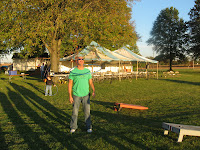 And went on a chilly hayride after dark where the kids got into a hay fight: 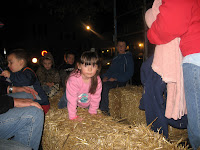 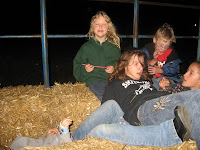 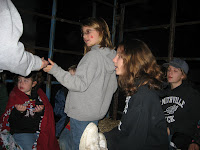 Jessie came over to me about 9:30 (where I was sitting extremely close to the fire trying to stay warm), sat on my lap and proceeded to FALL ASLEEP. And she slept until Todd finally put her in the Durango at 10:30 to go home. While Tyler ran around with the rest of the kids like a banshee ready to roll all night long.

Our 3rd cutting of hay is baled, the barns were cleaned out and we had fun. What more could we ask for??
Kris

Posted by QuiltedSimple at 8:01 AM

Oh, yes! Sounds like an awesome weekend. There's nothing better then a warm fire on a chilly night and good friends close by.

37 goals? Goodness! Sounds like you've a very talented young boy...and a "tough" daughter not too old to know the warm nest of her mom's lap. Good times!

Hi Kris,
What a fun outing!
Congrats to your son! Way TO Go !
Hope you have agreat day!
Blessins',Lib

Sure sounds like the little guy did a wonderful job playing! I just love playing corn hole!!!! We usually switch back and forth between playing horseshoes and cornhole!!!
Kristie

We still have 2 more weeks of soccer though I am ready to call it a season now! Anyhow, great job on the goals!

It looks like it was a great and exhausting day!

What a wonderful time ya'll had. I'll be glad when Texas get some cool weather -- I'm ready to sit by the fire myself!

I'm glad Kristie talked you into joining our insanity. :)

Congratulations to Tyler! Oh my, this looked like such a fun get together! Love your sidebar "I am a soccer MOM!"