We have a bull. He's not mean by any stretch of the imagination, but he likes to play. One of his favorite toys is the water trough. He pushes it from one end of the concrete to the other, out into the field, end over end. Which means they get busted quite frequently. Which means purchasing a new one at usually a little more than $100 (we've been through 3 so far this year).

Then Todd was driving by an abandoned farm, and saw this: 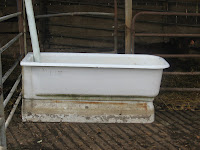 Friends of ours farm it, so he asked them if we could bring it home and use it for a water trough. Seal up the drain and the overflow, and we were good to go (although we've never seen one with a base like this one). It was pretty funny watching the bull hit it with his head for the first time, thinking he was going to send it going end over end. He stepped back, shook his head, tried it again, and has since left it alone. 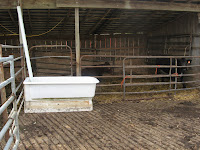 I would love to have it in a flowerbed full of flowers, but......now I don't have to go out into the pasture when I get home from work every day and drag the water trough back up to the shed and fill it again.
I did tell the kids - if they get covered in mud and think they are going to tramp through the house one more time - they can take a bath out with the cows. Which they thought would be fun.

The red wall has 2 more coats of paint - and looks like it's good to go.
PJ's are sewn together - I did use a pattern (McCalls) that I found at JoAnn's last year when they were on sale for 99 cents - I just need to stop and get some elastic for the waists. That has been the extent of my sewing in the last few days.
And the cat? He is now named Midnight, and I think once we make the trip to PA here in a couple weeks, he'll become an inside cat. Why not - he's been in the house with the kids every night watching TV (Tyler said he likes watching the Steelers play). It's actually rather cute to see them laying on the floor and him stretched out next to them. Every time you open the back door, he makes a mad dash for the house and tries to sneak in. 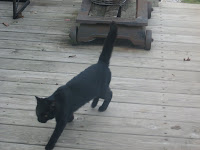 Have a good day!
Kris
The
Posted by QuiltedSimple at 8:28 AM

Love the bath for the bull!! And boy, it didn't Midnight long to become a housecat did it? You big softie!! ;)

what a great idea! wish i could have been there to see that bull "learn" not to flip this trough. midnight..cute name, cute kittie..how could you resist a boy and his cat.

Sounds like Midnight has found himself a good home. Lucky kittie and happy family that seems to be enjoying him!

Hi Kris,
Love your recycle tub! Wonderful idea!:o)
Has the kids had a bath in it yet.Lol
Hope you have a great day!
Blessins',Lib

I love the idea your kids taking a bath in the trough! If this occurs, you must get photos. How can you resist a football watching kitty? :)

That is so wonderful for you to give this kitty a good home. He is beautiful! And I betcha that bull doesn't butt into things before checking again... lesson learned!

what a great idea! so nice to recycle things! you are such a smart lady!

that's funny about the bull, we had a black cat like yours we called her Mogs......

Your story gives a whole new meaning to being "bull headed" ...which I have been accused of being, a time or two..tee hee...Can't wait to tell my Mr. Wonderful

Midnight is a perfect indoor kitty...cuddly and soft, after your "trip" he will be settled enough to stay in all the time...8-)

Good find...I bet that did ring his bell some. Those old tubs are high dollar. We've been looking for one for inside our house and they are outrageous!

excellent recycling idea. i bet you are relieved to not have to go fetch it everyday now. lol. great name for the cat too. he sure is a pretty one. funny how they always seem to finagle their way in a house isn't it? lol. take care.

Glad you fixed your watering trough problems. Figures the kids would think bathing with the cows would be fun.