One of my traditions (insane though it may be) is that I make the kids' their Halloween costumes every single year. It all started when Jessie was 3. The year before she had been a devil, which was a costume that I think my Mom had made (or had someone make) for my brother.

Since then there has been no turning back.


From Raggedy Ann, to a fairy princess, to a Victorian era girl, to a firefighter, a bear and a pirate, I drive myself insane every October making costumes. One year I could not find a football player costume pattern, and that is what Tyler wanted to be. So I had to buy the pieces for that one, and felt so bummed and guilty buying it when I should have made it.


It's certainly not cheaper than buying costumes. I think it's one of those things - someday (hopefully in the far distant future) I will have grandkids that I can pass these costumes onto. Although who knows, by that time they may not know what a Cheerleader or a Football player are.


So yesterday I went to Wal-mart to get fabric, notions, thread and a pattern: 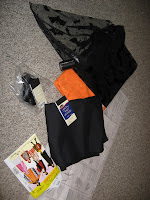 And last night, I got these started on: 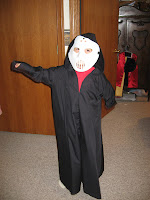 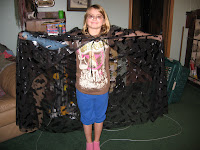 The cape is done, I just have the orange dress and witch's hat to go. I did start the dress, and ran out of fabric!

Usually I am organized enough to have them done long before Halloween. But it so happens that this fall we've been busy, and time has slipped away from us. At least they both picked easy patterns for this year!

We'll see how many late nights I have to pull to get them done - hopefully none. One year, Todd was out in Colorado hunting elk, Todd's mom was making Goldilocks and the bears costumes for all the grandkids (Jessie was Goldilocks and the 5 nephews were the bears). We were going trick or treating at their house on Wednesday - she called me Tuesday night at 7:00 with an I'm not going to have Tyler's costume done - he was 6 mo. old. What did I do??? Pulled the bear fur fabric out of my stash, and made him a complete bear costume. Suit, head, mittens and footies. I was up until 2:00 in the morning making that stupid costume. Couldn't be unfair to Tyler now could I and not have a costume for him, right? Todd thought I was insane that time.

I know there will come a time when both kids are too old for a costume made by Mom, but for now......I'm going to enjoy every minute of it.


Kris
Posted by QuiltedSimple at 8:00 AM

Hi, I found you on a link from another blog and wanted to comment on you making your kid's Halloween costumes. My husband and I make the kids costumes each year too. If you would like to see a couple of past costumes I have them pictured on my blog here:
http://myhomemadelife.blogspot.com/2008_09_01_archive.html
We have always had so much fun making costumes.

Hi Kris,
What a lovely tradition!
I think anything handmade is wonderful! And handmade is not always the cheaper route to go.
I have to laugh everytime I think of handmade is not cheap.As a crafter ,I make most og gifts I give. a Family member thought I did it being cheaper. One yr. she wanted me to help her make Christmas gifts, I gave her a list of supplies, the whole time I helped her with the project she complained how much it cost to craft.Lol
Have a great day!
Blessins',Lib

JoAnn ( Scene Through My Eyes) said...

I love the costume stories. I also made our kids' costumes - and the last year I made them was when our oldest was a Jr. in high school and our youngest was in Jr. Hi. The costumes were Santa Claus and a big purple bunny. The girls went to a neighbor's house in their costumes and the neighbor sat on Santa's lap for a photo - it was great fun (he looked so silly sitting on Santa's lap). The purple bunny has been worn by several friends - most of them adults - and still is enjoyed today - both at Easter and at Halloween.

yes, i agree. they will grow out of this fun tradition too soon.
I am making the kids costumes for the first time this year. I need to get on it! I am starting to feel spread a bit thin with all the holidays coming up!

What a wonderful tradition. My mom used to do the same for me until I was older. Then when I was 16 I started making them for myself.

This is so neat that you make these costumes. I used to do the same thing for my boys! What fun. I miss those days.

I make my son's costumes, too. This year I've got two more to make since the twins are walking and will want to join in the fun. I really wanted to cheap out and buy his costume this year since I'm getting short on time, but all the Super Why costumes are sold out online!!! Do you know where I can get lime green and royal blue polyester?? Yikes!

Your costumes look great! Its a great tradition, but can be stressful!