I drove to work in this (this was taken headed down 1-71 at 45 mph from West Salem to Ashland): 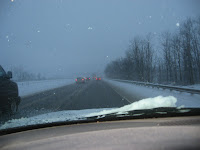 Really, I cannot believe we had school today. Although it appears to have let up a little, we are supposed to be hit with another 4-6" of the white stuff. We are headed for some frigid temperatures later on this week. High of 5 degrees farenheit for Friday. The chickens are being wuss's and will not go out of the chicken coop. But, who can blame them? I don't want to go out either!

I'm plugging away on my Seeing Stars Quilt A Long Quilt. I've decided to use the brown I have - as Todd pointed out - the intention for this is to be a king sized quilt to fit our bed. No one will notice if the border is a shade or 2 off, especially if I toss a pieced border (or 2) of some sort in there. I have just a little bit more to go, and I just may make it for the top (minus the large border) on the first round of brown that I found in the back of my closet. It will be close. 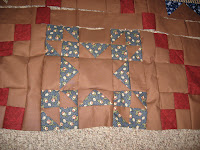 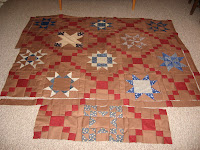 And, if you want to play Pay It Forward - head on over to my Mom's blog - she signed up when Angie did her round, and got the most beautiful cross stitch pattern. She's doing something knitted for her 3 participants...
Today I go talk to the principal at Jessie's school about tutoring in the dreaded subject....math. Although thanks to a comment left on 1 of the math posts, I found out about a possiblity of online tutoring for her. We'll see what the school says. I got the paper from her teacher about what they are working on this week, she says they are working on more of the same type of problems....Jessie brings home a paper with multiplication on it. Grrr.......
And our dinner out - it was good. Especially since we had a gift card to use that covered our meal but for $2.00 of it and the tip. Not as good as my cooking, but seeing as how we haven't gone out to eat in over a year.....I was glad to not have to cook for once....
Later,
Kris
Posted by QuiltedSimple at 8:53 AM

Yikes! We're on the steady decline as far as temps, with a high of 12 predicted for Friday morning. Brrr. But, nothing like what you're having and yet will. BE SAFE! And warm, too!

The quilt will be beautiful, no doubt. Your hubby's right...no one will notice a different shade on the border off a beautiful, king size quilt you've made.

And good luck on the meeting this afternoon. I'll be thinking about you, that all goes well and Jessie gets the best help possible, whether online or in the real!

We are going to be in the 40's and maybe 50's this week here, which sounds so much warmer than a high of 12. You must be getting some of the weather we have had lately.:)

I don't think anyone will notice the different browns, especially if it is in the border. At that point, it becomes a design choice, right?:)

Good luck with the math!

Hey Kris, I gave you the letter A

And isn't your cold weather headed my way later this week.

I will be joining you in finishing up Amanda Jeans Star quilt. The completed blocks are hanging in plain site and calling my name.

Kris we can't even buy a good snowfall here in Indianapolis. (I will probably have to eat those words before winter is over.) We are going to be cold, too. I enjoy your snow photos.

We are starting to get some snow flurries here in KY. The boys are praying for snow!!! :)

I love your quilt! The colors are really nice! I think it will look great when it is finished! It will be huge!!!
Kristie

Yikes! Did I tell you that you amaze me???? Really. How are you even leaving your home?

Tooooo neat...I grew up in Ashland. I have been following your blog for a while...I found it on The Beginning Farmer's Wife's blog and I new you were from Wayne County but didn't know you were that close to Ashland. I used to spend a lot of time in Shreve and that area...I miss home...I dont' wish for the snow or the cold but just a few times a year...glad to be in the south with warmer weather. Your quilting is beautiful. I am still learning...do you quilt by hand or machine? Good luck on all your endevours.

What we've got is headed your way. Look out. We had 4 inches of snow yesterday then blizzard conditions overnight. Right now we are at the high temp of the day- at +1 F. We're supposed to get another 3-5 inches of the white stuff tonight. I'm just glad my hubby gave me a ride this morning when the wind chill was -28! Brrr!!! Stay safe and warm
Judy

wow! stay safe and warm! i think todd is right, the quilt will look great

Well that area looks familiar! :=)
I am from WV and Michigan
Lived here in Wooster for 10 years now. It is so beautiful here. Wooster is
truly a small dream town
in OH and our new library
is just awesome
Susan

Wow, Kris. You are always going so strong even when the snow is flying and grades are slipping.

Your Seeing Stars quilt, chores, taxi-service, projects, dinners etc...are all proof that you wear many hats, and wear them well!

kris, sorry i didn't see your comment on my blog until today. our weather is very similar to what you got. this morning at 5 when we left the house it was 3 degree's. it's up to 10 right now. you probably would have been alright coming to work today but going home is the problem . it started snowing here today around 10 or 11 and hasn't stopped yet. you be careful traveling. how far off is spring? lol.

I always like a quilt with the chain blocks!