We aren't snowed in yet, but I sure ain't going anywhere else! 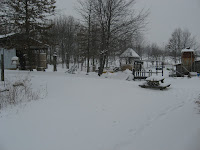 Last night, Jessie broke the nose pad off of her glasses. Her old glasses the prescription is so far off - she can't wear them. And the metal on her glasses was scratching her nose. I thought about super gluing the nose pad on, but figure the optomotrist wouldn't like that. And as much as these glasses cost us, I don't want to be buying new ones anytime soon.

So this morning, we drove the 14 miles to Wooster just to get her glasses fixed. But, it worked out, we got her glasses fixed, a quick stop in the grocery store for peanut butter, dish soap and bbq sauce, and we were on our way home. The roads weren't to bad going in - but it was reasonably early (9:00 ish) and I was the only one on the road. And they hadn't been plowed yet.

The snow is pretty - especially since I'm inside looking at it!!!

So this afternoon I thought I'd work on 1 of my finishes for January. I have everything planned out what I want to finish each month, I have new stuff I want to start but I'm not letting myself start anything new. But I don't have enough of anything that I need to finish any project. I made this quilt top the other day: 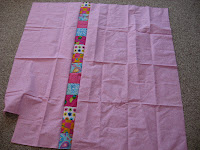 But am totally out of batting so I could get it quilted. This is for a baby gift for a shower coming up here in a couple weeks.

I have this felted wool table runner to finish - but don't have the ecru DMC floss to do it: 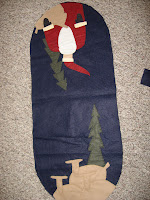 I have this table runner to put more stars on, but am out of gold wool. 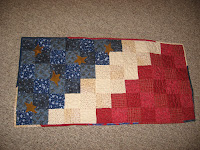 I could clean, but that's not very fun on a snowy day. So I guess I will go and try to start on one of next month's finishes! And then I talk to my Mom, and she rubs it in that she has 2 of her finishes for the challenge done. UGH.

Todd told me he would take me back to Wooster to go to JoAnn's, but I cannot see wasting the gas to drive there and back, when I have to go there after work on Monday.
Hope everyone has a wonderful weekend!
Kris
Posted by QuiltedSimple at 12:48 PM

popped by to say hello, and to wish you a happy weekend, love your projects that you have on the go....

I'm amazed at how many things you have on the go at once.

Pleased the glasses got fixed OK but what a pain tp have to drive through the snow so far. Hope it doesn't get any worse!

It's very cold here in the UK but for once strangely it's warmer in the North!

hey kris. glad you got the glasses repaired for jessie. i wear them too and trust me your world is all out of whack when your spectacles are. lol. too bad you had to go out in this weather though. it was the worst here yesterday(saturday) but it wasn't as bad as i thought it was going to be. for awhile i never thought it would quit snowing yesterday. lol. i'm trying to hang in there and keep my spirits up. thanks for the words of encouragement. keep up the good work on all of your projects. i love the brown quilt you are putting together. too bad you ran out of your fabric. you will find something that will work though. i know you will. lol. take care.

North...keep that snow north! I talked with my parents who are somewhat near you and they have a foot or more! Yuck! Careful driving!